“Here we confront a terrible paradox like unto the divinely revealed Hell Laws of the Discordian religion, which hold that (1) Hell only exists for those who believe Hell exists and (2) the worst part of Hell is reserved for those who believe in Hell because they think they’ll go there if they don’t believe in it.”
– Robert Anton Wilson, introduction to Taboo: ‘The Ectasy of Evil’

RAW is talking, above, about This’ll Kill Ya, a novel by Harry Willson (published in 1991) which is a sort of satire on censorship. Here’s how he described it: 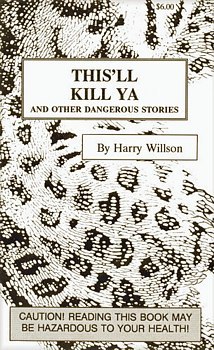 “The plot concerned a book which allegedly kills people. The policeman investigating this book is, naturally, a bit cautious once he gets his hands on a copy of the loathsome and fearful volume. The reader also tends to become cautious, after a while, since it soon becomes obvious that the book you are reading is the book you are reading about—the book that can kill people, which is called This’ll Kill Ya …”

It’s like the revealed “Hell Laws of the Discordian religion”, because, in the novel, those most at risk of harmful effects from reading the book are those who most believe in the diabolical power of words to harm us. And, ironically, these tend to be the people most likely to form censorship committees, and thus ban the book from everyone, including those who don’t superstitiously believe that words on a page might endanger them.

CAUTION! IF YOU BELIEVE IN CENSORSHIP, DO NOT READ THESE PAGES, THEY WILL BE HAZARDOUS TO YOUR HEALTH.

THE PURPOSE OF THIS BOOK IS TO REMOVE NOSEY BELIEVERS IN CENSORSHIP FROM THE GENE POOL.
– Harry Willson, This’ll Kill Ya

RAW writes that after pondering, for years, the mystery of why some people are so terrified of certain words and ideas, he thinks he’s found the answer – provided by the 18th Century Neapolitan sociologist Giambattista Vico. RAW says that Vico implied morality derived from traumatic experiences with thunder – ie the belief that certain actions, or words or images, aroused the anger of the thunder god.

Hence the lingering fear that we’ll be struck down for breaking taboos. (It might also, RAW notes, be why thunder seems to be the background sound of choice for horror-film directors who wish to activate our “deepest collective anxieties”).

Fast forward a little bit to the contemporary political situation. You often hear – particularly on social media – the outraged scream of “CENSORSHIP!”. If people wish to clamp down on expressions of language that convey racism, climate denial, unsupported conspiracy theories, etc, they may be accused of censorship. Perhaps the semantics involved indicate an altogether different type (or level) of “censorship” than addressed in Harry Willson’s book? The political metaphors seem different at least (eg preventing the wider “spread” of “toxic” “poison”, etc, rather than avoiding being struck down by a strict paternal diety).

And in case we should take the dangers of “mere” language too lightly, here, from a slightly different context, RAW comments on the real power of language for good or ill:

“This Heap Big Magick, bwana. You can fucking kill a guy with this stuff. And, of course, if you have Dr. Erickson’s compassion, you can repeatedly heal the seemingly helpless.”
– Robert Anton Wilson, Black Magick & Curses (Email to the Universe)

Posted on 5 May 2020 — comment on the Semantic Schmemantic page