The notion of solipsism comes up in an interesting passage in Cosmic Trigger III (from the chapter, Chimes at Midnight, in which RAW reflects on his friendly disputes with Bob Shea, co-author of Illuminatus!): 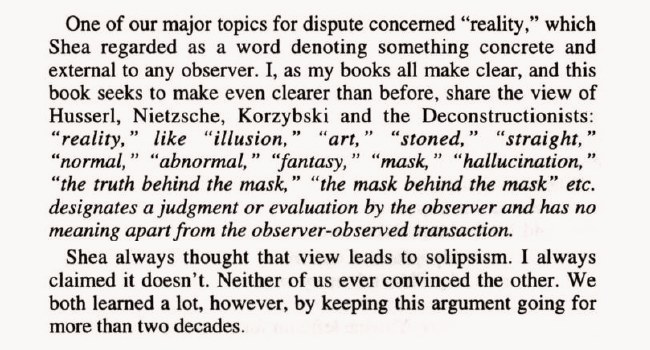 As a reminder, “solipsism” refers to the view that one’s self (or mind) alone exists – from the Latin solus (alone, sole) + ipse (self). One can perhaps understand how Wilson’s description (observer-independent “reality” viewed as meaningless) might, for many people, imply solipsism.

In fact, in a much earlier trilogy of columns (for New Libertarian Weekly, 1977/78*), RAW writes about solipsism as a logically irrefutable, inescapable “trap”; an unavoidable conclusion to a sceptical and parsimonious line of thinking about “external reality”:

‘…the impeccable logic of David Hume and the experimental evidence anyone can discover through daily meditation for only a month or so, demonstrate that all we know directly is a stream of sensations. The theories that there is an “ego” experiencing this stream, and an “outside” world provoking it, are inferential, unproven and (if we are strict about applying Occam’s principle of parsimony) should be rejected as illegitimate.’  [2]

Despite this apparently convincing logical and experiential basis for solipsism (he also demolishes common objections to solipsism), Bob doesn’t see himself as a solipsist – he writes that the kind of scepticism he practises (he prefers the label “neurological relativism”) doesn’t quite lead to solipsism.

But why not? Well, in the first (very brief) column of the trilogy, he provides a Zen story, but leaves us “hanging on that ontological cliff until my next column”:

‘A monk, after long meditation, perceived the facts noted above.
In great excitement, he rushed to tell his roshi (Zen teacher),
“I have it! I have it! That rock there is inside my head!”
“You must have a very big head,” said the Teacher, “to hold a rock that size.” ‘ [1]

In his second column, RAW extends the basis for a solipsistic view, from philosophical logic and meditational experience to the discoveries of modern neurology and physics. He writes: “In this Heracleitian flux, Doubt becomes not a philosophical choice but a necessary habit… There seems to be no way out of the silk-lined womb of solipsism.”

RAW continues to say that Aleister Crowley “got into this trap in 1905”, after years of practising ceremonial magick and yoga, while simultaneously attempting to maintain a philosophy of Scientific Materialism. “He found that he couldn’t believe anything anymore and feared for six months that he was going mad. He came out of it when his horse fell off a mountain, 40 feet, nearly killing him.”

And Zen teachers, RAW writes, bring their students out of “this womb-like solipsistic stage” by hitting them on the shoulder with a wooden staff. [2]

(Not mentioned by RAW here, but of possible interest – a much later remark about solipsism by Crowley, in Magick Without Tears, Chapter LXXXII, when discussing the ‘Holy Guardian Angel’: “…in this case the postulation of another being is not necessary. There is no way of refuting the solipsism if you feel like that. Personally I cannot accede to its axiom. The evidence for an external universe appears to me perfectly adequate. Still there is no extra charge for thinking on those lines if you so wish.”)

If painful physical shock brings you out of a solipsistic mindset, then persistently vexatious, challenging “life experience” seems a preventative against it. Or at least that appears to be the implication of RAW’s third column:

‘I have had to confront the nitty-gritty gut-level reality of the iron laws of economics in a manner and with a persistence that makes me as much of a believer in “external reality” as any Marxist or Objectivist could wish.’  [3]

‘Nobody who has gone through the rituals of social degradation involved in falling from Associate Editor of Playboy to Welfare “case” (Americanus nondesirabilis) can be a solipsist.’  [3]

Many people, I suspect, won’t buy this as an argument against solipsism (after all, solipsism isn’t a philosophy that claims all experience is inherently or potentially pleasant). The mere fact of the painful intensity or exasperating persistence of unpleasant experience doesn’t refute the logic of solipsism – at least not directly, that I can see (in fact, RAW has, in a way, logically demolished these objections to solipsism already, in the first two columns, as unparsimonious products of inference).

So, does Bob artfully attempt to “have it both ways” here? After remarking, “Of course, I am not a solipsist”, he writes: “Nonetheless, my skepticism [of the ‘external world’] does verge very close to the solipsistic extreme”. [3]

I regard his argument as being more subtle than the seeming contradiction implies. He goes on to say that “the solipsist position is the minimal truth, i.e., that all we really know is a stream of sensation.” [3]

“The minimal truth”? My reading of this: Solipsism not as philosophically “right”/”wrong” but as (currently) incomplete for usefully navigating diverse varieties of experience in any semantic grid that it’s conventionally couched in. Those conventional neurolinguistic frames unfortunately bring to the concept of solipsism a lot of archaic philosophical baggage (implicit assumptions about nature of subject/self, subject-object relation, etc).

⇒ More on these subtleties of RAW’s solipsism arguments in Part 2 – which is now available. It also includes musings on Cartesian, Neo- and “Eschatological Pantheistic Multiple-Ego” variants of solipsism, and the connection between solipsism and quantum theory! 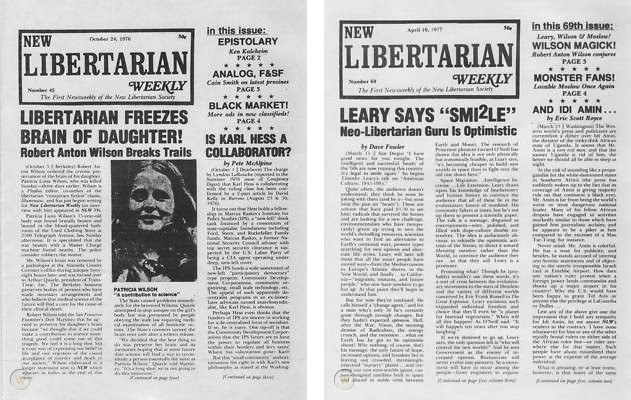 (A couple of covers from New Libertarian Weekly. Source)

*The trilogy of Wilson columns for New Libertarian Weekly is available online:
[1] The Compleat Skeptic
[2] Skepticism and Solipsism
[3] Neurological Relativism