Reading Richard Rasa’s article* about Dr Leonard Orr (to whom RAW attributed the “Thinker and the Prover” notion described in Prometheus Rising) led me to think about Phil Laut, an interesting writer/speaker, who, for several reasons that I’ll try to convey here, may be of interest to readers of Robert Anton Wilson.

RAW cites Laut in several places. Significantly (I think), he’s included in the short list of contemporary writers that RAW thanks on the acknowledgements page in Prometheus Rising. Phil’s also mentioned in the chapter, ‘Neurogeography of Conspiracy’, in RAW’s Right Where You are Sitting Now (1982); and in his 1987 introduction to Monsters and Magical Sticks, RAW writes:

“If it is still not clear that there are no limits in the province of the mind, get a copy of Phil Laut’s book, Money Is My Friend, which tells you how to become rich and stop worrying about money. Analyze what the Laut system has in common with this book and Christian Science.”
– Robert Anton Wilson, intro to Monsters & Magical Sticks (by Steven Heller & Terry Steele) 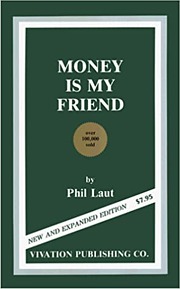 I immediately followed this advice (as I worried about having damned little money), and I really liked Money is My Friend for several reasons. It’s written in a clear but slightly strange (in a good way) prose style – superficially like a New Age positive-thinking ‘prosperity consciousness’ manual, but with a sort of ‘knowing’ metaprogramming nudge-wink (I mean, ponder the book’s title!). I found it quite inspiring and ‘hypnotic’. Much later, to my surprise, Phil Laut emailed me, completely out of the blue, to thank me for mentioning him in various places on my Anxiety Culture website. He added: “Congratulations on getting the joke”.

(Another reason I appreciated Phil Laut was for his deconstruction of a raft of “deep” western beliefs and attitudes about “work” and “jobs” that underlie what we call the Puritan Work Ethic – that’s why I liked to quote him in Anxiety Culture).

The Thinker and The Prover

In Money is My Friend (which was first published in 1979), Laut writes the following about The Thinker and The Prover (TTATP):

“Your life is ordered by your thoughts. My friend Bobby Birdsall describes this very simply by saying that the mind is composed of two parts – the Thinker and the Prover. The Thinker thinks and the Prover proves whatever the Thinker thinks. The Prover does not care what you think; you can think whatever you want to and the Prover will prove it to be true. The job of the Prover is to keep you from going insane; because if you went around all day thinking ‘People will hurt me’ and you discover that everywhere you went people loved you, this would drive you nuts.”

Laut extrapolates from TTATP to what he calls “The Suggestion Principle”, in which you ask yourself, “what would I like to think in order to create my life the way I would like it.” This has applications for both metaprogramming-style affirmations and “rebirthing” practice (see below).

There seems a structural similarity between TTATP and what you could call “pop magical thinking” (of the type popular in many ‘New Age’ books‡) – particularly in Laut’s version, and also in some of RAW’s metaprogramming type exercises/affirmations. But you can see a subtle distinction. On occasion RAW criticised pop magical thinking, and he brought his relativistic/anti-metaphysical approach to the TTATP notion.

It might also help to distinguish between ‘meta-model’ and Milton model as contexts for considering these psychological and philosophical issues. Note that RAW’s recommendation of Laut’s book is in a book about hypnosis. 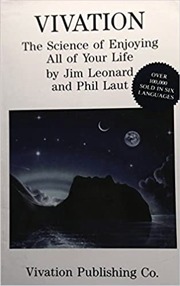 I found this book to be a very clear, practical guide to circular breathing. I’ve read Stanislav and Christina Grof’s Holotropic Breathwork (but not Leonard Orr’s work), and to my mind, Laut’s book compares favourably as a step-by-step manual.

Of likely interest to some RAW readers, the VIVATION book also contains a more philosophical section – a sort of metaprogramming advice for applying the TTATP ‘formula’ to experiential results of the breathing practice – eg to facilitate contexts of “acceptance” and “integration” for experiences that might otherwise be resisted or “suppressed”. Blissful experience is the aim. Metaprogramming affirmations are used, not in a robotic “positive thinking” way, but as an aid to radically shift the context in which experience is “held”:

“There is no universally appropriate context… the ability to shift contexts freely is highly desirable. […] One of the best ways to change contexts is to hold a thought that can only be true in the context you are switching to.” [This is the affirmation technique]

“If you find any way to hold what you are experiencing in a context where it’s funny, you will integrate it.”

“The mind is incapable of knowing what anything is and is also incapable of grasping fully that it cannot know. All the mind can do is create models and then insist that reality fits those models, which reality never fully does.”
– Phil Laut & Jim Leonard, VIVATION: The Science of Enjoying All of Your Life

⇒ In case anyone goes looking for Phil Laut’s presence on social media, etc, I should probably mention that he died in 2010.

* I came across this article from a recent Facebook post – which contains a video of Leonard Orr. The article is from about the time the video was shot (circa 1999) according to the post.

‡ I use the term ‘New Age’ loosely/broadly, with no derogatory sense implied.

This is a fairly new blog, so please bear with us as we add more material – thanks!