‘It was the year when they finally immanentized the Eschaton.’

Election fraud on the scale alleged by Donald Trump implies major conspiracy – even before you add a media cover-up. The conspiracy looks not only big but positively labyrinthine when you note that Republican-controlled districts featured in the “fraud” – and even Trump-friendly media joined in the “cover-up” (Murdoch turned against Trump?)

It has the makings of what RAW called the “Really Big Conspiracies” – the ones with “a Strange Loop in their construction”. Thus, every iteration of a media network saying there’s “no evidence” (of major vote fraud) counts – to the believers – as evidence of a bigger, wider cover-up. As Bob remarked: “Against that kind of logic, the gods themselves contend in vain” (intro to Everything Is Under Control). 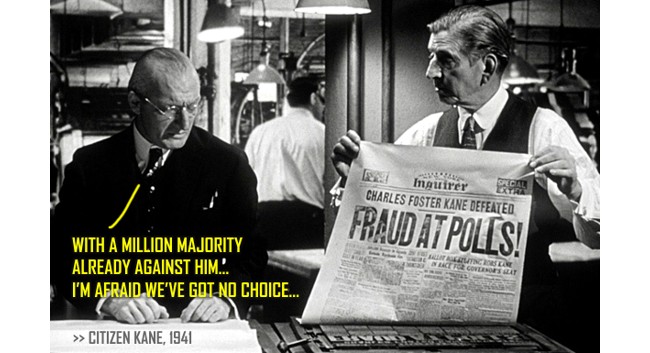 ‘None of the investigative agencies charged with bringing hard evidence into court, however, have ever found traces of any of the Really Big Conspiracies that most “conspiracy buffs” believe in.’
– RAW, introduction, EIUC

The Orange President previously claimed that several million fraudulent votes were cast in the 2016 election – but he ended up disbanding his own stacked commission, in 2018, after it found nothing. At this point I think the compassionate action would be for Donald’s family to convert one of his golf courses into a cartoon golf-themed nursing home, where he can receive 24-hour care and attention.* Meanwhile, though, he still has the nuclear codes, the Supreme Court, and a whole bunch of fanatical – and armed – followers.

‘Men (and women) indeed become strange when seeking gods. As the present work will show, however, they become even stranger when seeking devils.’
– RAW, introduction, EIUC

Even with a US President trying to undermine democracy with an ALL-CAPS CONSPIRACY THEORY!!! (his exclamations), some prominent commentators say there’s “nothing new here” – that the problem is systemic, not about personalities, and that we shouldn’t make it all about Trump. That seems valid enough, I suppose, in the banal sense that nothing ever appears entirely new or about an individual; underlying established systems still feature causally. But why limit ourselves to either/or thinking on such issues? If I shift to a Jungian perspective, I see a potent Cult of Trump (C.o.T.) with a President’s “individual”, er, peculiarities, very much politically/socially/culturally significant in the same way that Jesus Christ, Adolf Hitler, Marilyn Monroe and Hannibal Lecter appeared ‘archetypally’ significant. (Not that I would put Trump in that bracket).

And if we shift to, say, a McLuhanesque (or similar) viewpoint, we can see all kinds of new political-social-media transformations occurring – or perhaps not “see”, exactly (but tentatively conceptualise). Elites vs ‘ordinary’ people? … Corporate media vs independents? … Anti-establishment vs Establishment? These old binary political frames/categories, which I once found valid enough for high-level commentary, now look indurated – they seem inadequate for making sense of the fast-moving fractal-like chaos and complexity evident in 21st century political culture.

RAW practised intentional bisociation, dissociation of ideas, Edward de Bono’s Po, and other cognitive gimmicks, in order to generate novel seeing and thinking. His books are full of practical suggestions on how to “shake loose” from old, conditioned thoughts and reflexes. He adopted new terminologies (eg from evolving social sciences and information technology) and constantly deconstructed established categories and dichotomies – particularly in social/political contexts.

‘It almost seems that the human mind works like a giant magnifying glass: If you turn it to Positive Thoughts, it will enlarge them and multiply positivity endlessly… but if you turn it upon Evil, it will soon show you everything you most fear lurking with slavering jaws and green tentacles right outside your front door.’
– RAW, introduction, EIUC

Seeing the new, the fresh – ie not reducing experience to what we already think we know – seems like a conscious choice or preference. And it can seem like an effort, usually worthwhile. But then conventional tribal politics might drag us back – eg with overuse of the kind of floating categories (“liberal”, “elite”, “establishment”, “the media”, etc) onto which pretty much anything nefarious can be projected. A demagogue’s populist rhetoric – parroting such hypnotic signifiers – easily sets up angry either-or, them-&-us territorial binary framing – but aligned with the demagogue’s interests. Steve Bannon used this type of rhetoric a lot during the Trump campaign and earlier (“There is a growing global anti-establishment revolt against the permanent political class at home, and the global elites that influence them, which impacts everyone from Lubbock to London” – Bannon to NYT, 2014).

‘Now, not just the far left and the cynics see all manner of double-dealing in Washington: The far-right wing has even more dire suspicions than all the galoots ahoof in the Republic added together.’
– RAW, introduction, EIUC

Breitbart, Infowars, RT.com, etc, also used such rhetoric, blurring the lines between anti-establishment ‘left’ and so-called alt-right. A lot of the QAnon-type conspiracy thinking seems built upon political ‘devil group’ tropes that will seem familiar to many: “deep state”, “mainstream media”, “liberal establishment”, etc. And to the extent that such categories/frames seem familiar and internalised as “reality” (as opposed to merely convenient abstract nouns), they also seem prone to being co-opted and “weaponised” by starkly unprogressive interests. The obvious case in point: billionaire businessman Donald Trump, with funding and help from billionaire hedge fund CEO, Robert Mercer, ran successful sub-campaigns (leading up to the 2016 election) based on traditionally ‘left’ anti-elite, anti-establishment, anti-media frames.

(The same appeared largely true of Brexit. I’ve written previously on how some influentual pundits bought the whole “left-behind ordinary people” anti-elite framing of the Leave (Brexit) campaign – apparently because it confirmed and reinforced the ways they were already thinking/generalising about politics from the perspective of these overworn ‘left’ tropes).

Angela Nagle has made a similar point in Kill All Normies – that 60s/70s-style countercultural transgression created a kind of void into which any ideology can now flow, as long as it appears anti-establishment and contemptuous of mainstream values. Nagle argues that whilst it was originally “left-cyberutopians” who were optimistic about the shift from old establishment-media control of politics to “leaderless user-generated social media”, the reality of this has enabled the right, not the left, to take power:

‘The online environment has undoubtedly allowed fringe ideas and movements to grow rapidly in influence and while these were left leaning it was tempting for politically sympathetic commentators to see it as a shiny new seductive shortcut to transcending our ‘end of history’. What we’ve since witnessed instead is that this leaderless formation can express just about any ideology even, strange as it may seem, that of the far right.’
– Angela Nagle, Kill All Normies

Discord & chaos – but in a bad way

‘But since most people need some narrative or model to explain the world, if they don’t trust the media, who can they trust? Nobody. Then how can they make decisions? More and more, they reactively assume reality is precisely the opposite of whatever they are being told by the Voice of Authority.’
– RAW, introduction, EIUC

Perhaps the user manual for the emerging decentralised digital media could be titled ‘Disruption & Destabilisation for Dummies’? This looks like the Pandora’s Box of 21st century politics – as Bruce Sterling puts it, these modern disruptive movements seem “fatally easy to assemble” and “almost never have the aim of promulgating rational programs for legislative action”. In the rapidly changing infowars landscapes, they acquire followers shockingly quickly – those who regard the existing establishment/system as “rotten to the core”, drawn by political rhetoric loaded with ominous social metaphors: tearing down, taking apart, dismantling, removing, sweeping away, “draining the swamp”.

The framing isn’t about building or progress (eg in Karl Popper’s sense of piecemeal democratic improvement, or Richard Rorty’s sense of “solidarity”) – it appears to be about take-down, dissolution, “cleansing” and “purity”. Seemingly stark either-or, all-or-nothing approaches, fueled by paranoid conspiriologic.

Do you recognise the above direction in Robert Anton Wilson’s creative trajectories, his philosophical outlooks? No, I don’t either. Equating Bob’s futurist guerilla ontology with the often ghoulish (and somewhat backward, reactionary) ontological nihilism haunting much of the output of 4chan, QAnon, etc, seems to me like a misreading of either, or both.

QAnon has been described as “a meta-conspiracy theory” that appeals to a “latent desire for apocalypse and collapse”. It’s also seen, by some, as a “metamodern” phenomenon for a post-truth world, akin to ARGs (alternate reality games). Perhaps that gloss gives its followers the idea of special vanguard identity – rather than something rooted in dark authoritarian power plays. As with social media algorithms, one wonders about bad actors paying attention specifically to what works (in a Darwinian memetic sense) – to exploit for God (or Eris) knows what ends.

Meanwhile, Bruce Sterling puts “it” into a wider geographical and political context:

‘It’s the same phenomenon over and over, just with different branding: the Arab Spring, Occupy, Gezi Park, Euromaidan, the Ukrainian Civil War, Brexit, and now Donald Trump – except the last two have garnered legislative power. These miasmas appear anywhere save for the managed democracy of Russia and inside the Great Chinese Firewall, which is why both those powers now concentrate on spreading mayhem outside their borders. And whenever they do, they’re always electronically rapid. This means that they are spontaneous and therefore rantingly demagogic, unprepared for power, and tend to be poorly thought-through. Their political results are generally awful.’
– Bruce Sterling, Notes on the 2016 US election 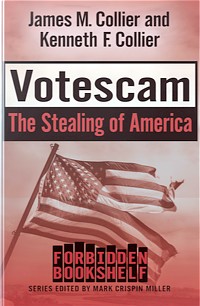 Since this post originated with my thoughts about Trump’s election fraud conspiracy theory, I should note that RAW has a couple of entries on the general theme of election fraud in Everything Is Under Control. Firstly, the ‘Collier Brothers’ – two journalists who “happen to believe that election frauds have become common since 1970” – and who attribute this to the vulnerability of the computer systems “to manipulation by sinister forces such as the CIA.” They wrote a book, Votescam, detailing their views.

And, secondly, ‘Veil’, an entry on the book by Bob Woodward, which “presents evidence that the CIA has intervened in U.S. elections…”.

* To borrow a form of a joke I once heard RAW make about a Christian evangelist with insane notions.