In the Cosmic Trigger III prologue, RAW acknowledges his “Usual Sources” (Fuller, Leary, Hubbard, Korzybski, McLuhan), but then adds: “I would also like to acknowledge specially a few who played a major role in shaping and inspiring the present work – Moses Horowtiz, Orson Welles, James Joyce, Jean Cocteau, Harold Garfinkle and the man who called himself Elmyr.” (my emphasis)

Cocteau appears in the CT3 text only in relation to the Priory of Sion saga* (and Arlen’s theory that the Priory came into existence “in a Paris basement c. 1930 when Cocteau, Breton, Dali and other first-generation surrealists decided, while smoking opium, to start their very own International Conspiracy”).

But apart from a labyrinthine hoax(?) created to overthrow the Catholic Church(!) and the fact that Cocteau evidently served as 23rd Grand Master of the mysterious Priory, why else would RAW acknowledge Cocteau so prominently?

Well, when you look at the main themes in CT3 – masks of reality, art and magick; reality of masks, etc – it starts to make sense…

‘Art is nothing but a transcendental lie.’
‘He who runs slower than Beauty will only create mediocre work. The work of one who runs faster than Beauty will appear ugly.’
‘Mythology is an illusion that becomes reality.’
‘Art is not a pastime but a priesthood.’
‘The poet is a liar who always speaks the truth.’
‘Art is science made clear.’
– Jean Cocteau (various sources)

Ezra Pound once described Cocteau as the best writer in Europe, and Cocteau appears in The Cantos, in memories and quoted. In another context (Guide to Kulchur) Pound refers, a couple of times, to Cocteau’s genius: “To establish some table of values as among men I have seen and talked with. Brancusi in some dimensions a saint. Picabia a brilliant intellect. Gaudier had and Cocteau has genius.”

There are some old photos available on the internet which show Cocteau, Pound, Man Ray, Tristan Tzara and other Dadaists and Surrealists at the opening of Le Jockey bar in Montparnasse, 1923. And in a recent Cocteau biography, Claude Arnaut writes:

‘It was Cocteau whom Pound visited, with Picabia and Joyce, during his move to the rue de Saints-Pères, in the spring of 1921, and Cocteau he would compare to that complete man the Renaissance dreamed of, in the letter he sent regularly to the Dial… after having deemed Cocteau the most talented poet and prose writer in Paris.’
– Claude Arnaut, Jean Cocteau: A Life (2016)

As for Arlen’s theory (or jest) about the Priory of Sion originating in a 1930s Surrealist hoax, it makes more sense to me in terms of Cocteau’s background, contacts and interests than it does with André Breton, Dali & co. In most accounts I’ve read of the Surrealists, they’re depicted as loathing Cocteau as some “lightweight” dabbler and arriviste. At the behest of Breton (who reportedly despised him for his privileged upbringing and homosexuality) they persecuted Cocteau for two decades – heckling and throwing stones at premieres of his plays, phoning his nervous mother to tell her he’d died in a car crash, etc. (There seemed to be a rapprochement with some of them later, post-WWII).

I was happy to see the “lightweight” insult finally put to rest in a BBC2 documentary on Surrealism presented by David Lynch (‘Surrealist Cinema’, BBC Arena, 1987 – part 1/part 2). Lynch says: “in my opinion, Cocteau is the heavyweight of Surrealism” (that’s in part 2 – the videos linked to aren’t great quality, sorry, but best I could find). The Surrealist element seems strongest, I would say, in his Orphic Trilogy: Le Sang d’un Poète (The Blood of a Poet, 1930), Orphée (1950) and Testament of Orpheus (1960). Some of Cocteau’s line drawings seem to me to have a remarkable rare ‘occult’ alive quality – he described drawing as handwriting that was unravelled and then tied up again, but in a way that would provide a conduit to a poetic, ‘angelic’ realm. So, an alchemist/magician among artists. (Some of Austin Osman Spare’s work also comes to mind as comparable in this respect).

‘Mystery has its own mysteries, and there are gods above gods. We have ours, they have theirs. That is what’s known as infinity.’
– Jean Cocteau

Maybe there’s something in that 23rd Grand Master thing? Part of the Oedipus Rex production, that Cocteau was working on with Stravinsky (mid-1920s), needed to be translated into Latin to give a more liturgical air. The translation was made by Jean Daniélou, a young seminarian who later became Cardinal Archbishop of Paris. As noted by RAW in CT3, Daniélou was named in an anonymous 1983 publication, Scandals of the Priory of Sion, which caused a bit of a stir – it claimed Daniélou had been involved in the Priory since he met Cocteau decades earlier, and that he’d acted as middleman in financial dealings between the Priory and Michele Sindona (you can read about him in my post on Penny Lernoux).

RAW delivers the following passage as an arresting opening to chapter 25 of CT3. I provide it here with the caution that bizarre situations involving cardinals, alleged prostitutes, heart attacks and heaps of money may have relatively mundane explanations. (In this case, the Society of Jesus later claimed that Daniélou was bringing money to pay for the bail of the woman’s husband):

‘On 20 May 1974 Cardinal Jean Danielou died in the apartment of a young strip-tease dancer named Mimi Santini. Because high Catholic officials do not normally die in the apartments of young ladies who take off their clothes in public, and because the Cardinal had a “large sum of money” (New York Times, 25 June 1974) on him, the case attracted a certain amount of curiosity.’
– Robert Anton Wilson, Cosmic Trigger III, p167 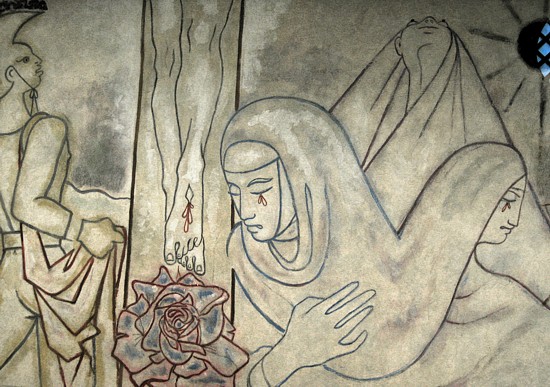 RAW mentions Cocteau in a few talks that I’ve heard him give. The one in which he says most (including Arlen’s theory and the claim that Cocteau experimented with peyote, as well as being “the biggest opium head in France”) is The I in the Triangle – from 1991, introduced by Joseph Matheny – the link I’ve given is to a slightly wrongly titled Youtube video which should start at 50:32, which is when RAW begins talking about Cocteau). There’s also an entry for Jean Cocteau in RAW’s Everything is Under Control, although this doesn’t add anything new to the earlier mentions in CT3 or the earlier talks.

* For more details about the Priory of Sion, see The Holy Blood and The Holy Grail, by Lincoln, Baigent and Leigh – and also, of course, Wilson’s Cosmic Trigger III.